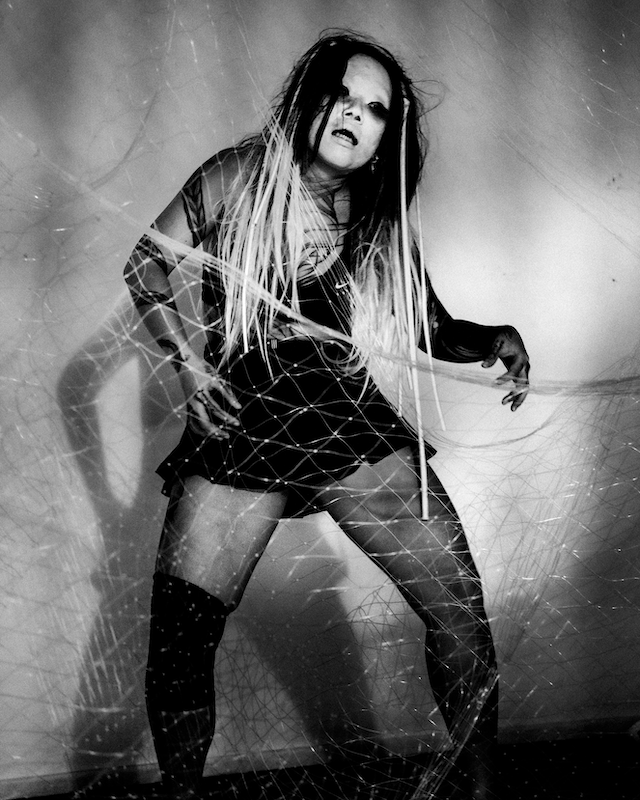 “…queer themes and imagery have been reoccurring, if not instrumental, in Butoh. The concepts of otherness and ambiguity, particularly with respect to gender identity and sexuality, permeate its narratives. Drag, androgyny and fluidity are staple elements.”
– The New York Times, “Queer Butoh: Finding Belonging in the Dance of Darkness”, 2020

Vangeline Theater/ New York Butoh Institute collaborates with Brick Theatre to present the sixth annual Queer Butoh 2022, available online from June 1-30, 2022 and in-person from June 28-30, 2022 at 8pm at The Brick.

In Person Performances include:

in a dark forest partly illuminated is a new performance created by dustin maxwell. It is a mix of dance ritual and visual art, where the body is both object and subject sensing into the unknown; both sculpture and transceiver radio picking up messages from the void. It is an invitation to partake in the painpleasure of exposure, submerging into shadow and emerging exalted.

shadowbloom by XUE and Mervin Wong is a soft spiral into the uncanny. The work unearths quiet stirrings and subterranean memories.

META GENDER by Hélène Barrier is the theatrical result of collective research centered on gender, body, music and performance deconstruction. It is born out of a commissioned work by the LUFF, the Lausanne Underground Festival in Switzerland. “The Contra-Sexual Manifesto,” reference text of the performance accompanies the Butoh dance, which imposes on the viewer, from the start, incarnation / transgression of its “flesh suitcase” costume. It offers to the dancer a prosthetic body, which leaves everyone free of projecting their own body fantasy. Made of stockings and tights (polymorphic material malleable depending of the textures which it is filled with: cotton, foam, flour, beads, polystyrene beads), it reveals here and there another body, bloated, overloaded, hiding unexpected and unfinished movements. The costume becomes a new skin, cellulite, testicle, breast, penis and dildo.

XUE is a Singaporean performance artist and butoh practitioner. As a butoh dancer, Xue has exhibited butoh work for The Online New York Butoh Institute Festival (2020) and was one of the featured artists of the Online Queer Butoh Festival (2021) presented by Vangeline Theater/ New York Butoh Institute. In 2021, Xue also presented their work ‘SLEEPWALKERS’ at Dance Nucleus’s Scope #11. For XUE, butoh is the truest expression of spirit.

Mervin Wong is a performer. Raised in chambers of string, it took a moment for him to recognize the viola as his truest limb. The tectonic shift to this deeper, enduring register has shaped his foray into electronic music-making. Mournful but reft of grief, Mervin Wong’s long-form sensibilities rouse our waterflesh. Years of forging his intention allow his process to be bright with speed. In service of resonance, every grain is burnished to the bone. A canoe made of ice. His sounds return to matter. Where footsteps span lightyears. Waves seethe and where the cosmos can glide through an albatross. Mervin Wong is a performer, violist, composer, and electronic producer. He is an artist that is deeply dedicated to the shared experience of sound.

dustin maxwell is a movement-based visual artist currently living in New York City. He was born queer into a Mormon family of eight in Albuquerque, New Mexico where he took his first ballet class at the age of three. As a teenager he studied modern dance and Barbara Clark’s somatic approach with his teacher, Joanne Emmons. In 2005 he relocated to Minneapolis, Minnesota, where he spent a decade studying dance and performing locally and internationally. He began studying butoh with Gadu Doushin in early 2012. His work is sourced from ritual and sensitizing practices and aims to preserve those elements within “finished” works. Otherness, sexuality, spirituality, death and the magic of being are themes central to his art and life. His dances and performance installations have been presented in theaters, galleries, basements, alleyways and countrysides in Minnesota, New York, Sweden and Germany. He holds a B.A. in Dance from the University of Minnesota-Twin Cities. He is a 2019 Jerome Hill Artist Fellow and was nominated for a 2015 Sage Award for Outstanding Performer.

Kayva Yang is a movement-based performance artist, photographer, researcher, and freelance presenter. Her work on stage or in nature biomes explores the interconnections of body to nature intimacy, regeneration, and state management technologies. In her current projects, Lost 40 and Elastic Elm, Yang investigates extraction, interiority, and indigeneity within a boreal forest and a city boulevard. She is a 2020 Create Change Fellow of the Laundromat Project and recipient of grant award from Jerome Foundation and Lower Manhattan Cultural Council. Her completed project, Body in Flora (2016) was exhibited at New York University Kimmel Center and performed at Intermedia Arts and Southern Theater in Minneapolis. Kayva dances for Jill Sigman/ Thinkdance and Dustin Maxwell and formerly for Pramila Vasudevan/ Aniccha Arts and Dr. Ananya Chatterjea/ Ananya Dance Theatre. She holds an M.A. in Arts and Public Policy from New York University.

Mei Maeda is a NY-based dance artist and counselor-in-training. Originally from Hudson, New Hampshire, she began her dance training at Northern Ballet Theatre Dance Center. She earned a BA in Dance and Psychology from Smith College and has performed in works by Ohad Naharin, Robert Battle, Idan Cohen, and Angie Hauser. Since moving to New York, Mei has had the pleasure of working on projects with companies and artists including Monica Bill Barnes & Co, Mei Yamanaka Works, Tsuneko Taniuchi, Troy Ogilvie, Emily Climer, and dustin maxwell. Mei is currently pursuing a Masters in Mental Health Counseling at City College, CUNY.

Hélène Barrier is a textile designer, performer and self-taught artist from France who grounds her work in a slow meditative-like practice, unraveling polymorphic echoes of her environment. Fascinated by social insects and their intricate shelters, her work has taken many forms: textile installations, drawings and sculpture. She is also a Butoh dancer. Dance is a place of perpetual metamorphosis, where one is constantly searching for new paths to follow. It allows her to slip into all materials, into all skins, and depending on the place, to adapt her dance to the environment or to resonate with other works, as during her solo with Brancusi’s The Endless Column at the Centre Pompidou. For several years now, she has been developing Butoh and drag king workshops, real moments of sharing and empowerment, with the complicity of the Jerk off festival and the Point Ephémère in Paris. Her works cross gender and animality, ecology and difference, respect for the other and the territory. She defines herself today as a citizen artist, claiming from the beginning an eco-feminist approach, anchored in transmission.

VANGELINE THEATER/ NEW YORK BUTOH INSTITUTE aims to preserve the legacy and integrity of Japanese Butoh while carrying the art form well into the future. The unique art of Butoh originated in post-World War II Japan as a reaction to the loss of identity caused by the westernization of Japanese culture, as well as a realization that ancient Japanese performing traditions no longer spoke to a contemporary audience. The Vangeline Theater is home to the New York Butoh Institute, dedicated to the advancement of Butoh in the 21st century. vangeline.com