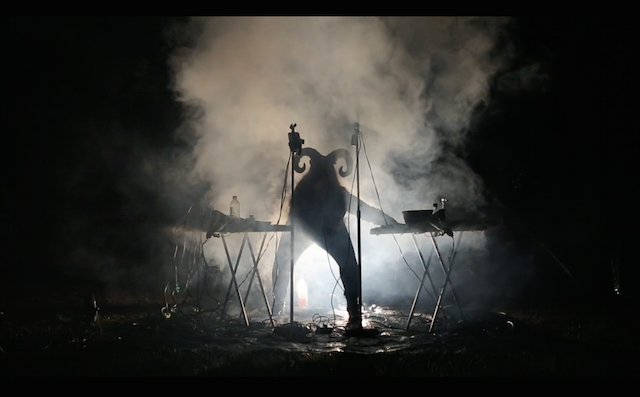 A One Woman Scottish Horror Excursion With Supernatural Foley Looping

Written and Performed by Jody Christopherson

After the death of her Grandmother, an American woman travels to an abandoned island off the coast of Scotland and unearths a dark family secret . . . in a world where the past is anything but dead.

This tale of supernatural horror is steeped in Scottish folklore and told in a tradition as ancient as its subject matter.  Jody Christopherson, alone onstage, creates her own sound score, lighting, and special effects to conjure a multi-layered storytelling experience.

St Kilda is inspired by the historic 1930 evacuation of Scotland’s archipelago of St Kilda.

“one of the funniest, spookiest experiences I’ve ever had at the theater. With the timing of a seasoned comedian, Christopherson sparkles as a storyteller, breathing exciting new life into this oldest of art forms. She’s a visionary in the theater world and legendary story-teller.”- The Theatre Times, New York

“Five Stars…creating a chilling atmosphere through light and sound onstage, Christopherson delivers one of the creepiest performances at this years’ Fringe.” — Global News, Edmonton

“The most enjoyable evening of theatre we’ve had in a long time . . . imaginative magic . . . a tribute to what Artaud called the “Alchemy” of the theatre.-Travalanche, New York

JODY CHRISTOPHERSON is a New York based, native Nebraskan, generative artists and the Artistic Director of the so-fi festival. Her mediums include; performance, playwrighting, conceptual design, direction, music/foley, photography, film, and curation.

Reviewers have called her a “visionary in the theater world and legendary storyteller”, who is “a talent to watch, not to mention a pleasure to hear”. Her works have been performed in 28 cities in 6 countries, including Canada, Detroit MI, New Orleans, Key West FL, Miami, Amsterdam, Germany, Lithuania, Australia, New York. She has been producing and co-producing her work since 2004 in America and abroad. Her productions have been nominated for a Drama League Award and 6 Innovative Theater Awards.

Ms. Christopherson is the recipient of an Indie Theater Fund Emergency Grant 2019, the 2017 New York Society Library Grant for emerging female writers underwritten by Alexander Sanger, the All for One So-Co Residency, and The LIT Fund Grant 2014.