Trudy and Mona: LIVE AND IN THE FLESH!!! 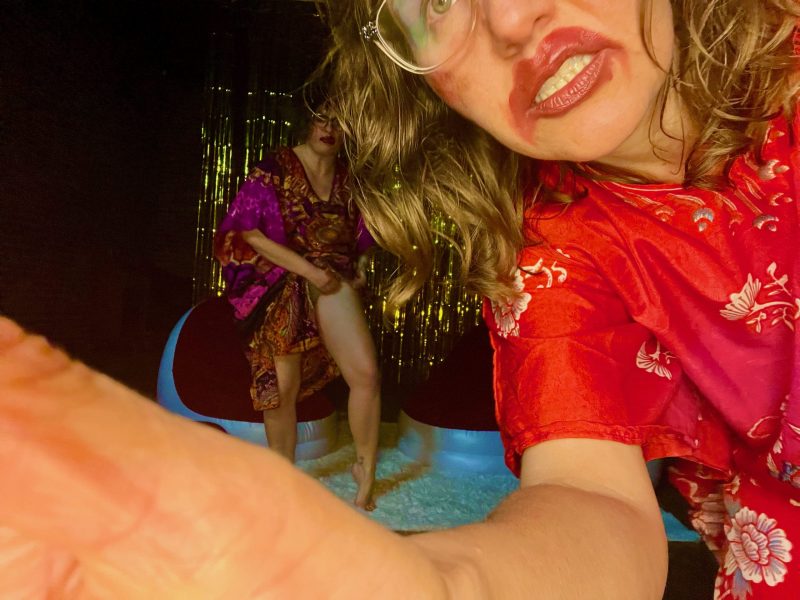 The Brick Presents
Trudy and Mona: LIVE AND IN THE FLESH!!!
by Khristal Curtis & Jessica Zodrow
May 23-30

In 2018 the disembodied spirits of Trudy and Mona possessed two unsuspecting bodies at an anthropomorphic horse-themed winery in upstate NY. The spirits latched to the bodies and now live as endoparasites within these hosts. Tonight, they are manifesting to premiere their live talk show, Trudy and Mona: LIVE AND IN THE FLESH!!!

Join the live studio audience and you may feel a healing energy, learn what you’re doing wrong with your life, get Flowbeed, dance a little Disco…or not! The world is your clam, do what you want. Don’t miss the chance to catch the whirlwind junkyard spectacular that is Trudy and Mona: LIVE AND IN THE FLESH!!!

Created and Performed by Khristal Curtis and Jessica Zodrow

Check out more from Trudy and Mona, including their corresponding projects CONSULTS and IN THE WILD on their website.

Jessica Zodrow (Mona) has worked as a theatre professional and Teaching Artist in the Portland Metro area, New York City, and the California Bay Area. This is Jessica’s debut at The Brick Theater. From 2019 – 2022 she served as the Director of Education for Curious Comedy Theater, where she still performs as a member of the improv team, Filbert. She founded and ran Joy & Wonder Theatre, an intergenerational immersive theatre company, from 2017-2021. Jessica lives in Portland, OR and creates performance pieces all over the country. She has an MA Educational Theatre from NYU and a BA Theatre Arts from Southern Oregon University.

Khristal Curtis (Trudy) is Brooklyn-based Theatre Artist and Applied Theater practitioner. She has created, contributed to, and performed in a wide variety of new performance-based projects. This is Khristal’s debut at The Brick Theater. In NYC, she has performed at La MaMa, Theater for a New City, Dixon Place Theater, The Leslie Lohman Museum, Japan Society, CAVE, Vital Joint, JACK, Panoply Performance Laboratory, Triskelion Arts, Scholes Street Studio, and the sidewalk outside of the Naval Cemetery Landscape across from the BQE. She has collaborated with The Pack Collective, LEIMEY, and Strange Candy Collective (which she founded in 2013).
Khristal is passionate about kittens, community-building, and creating art-making opportunities for communities with limited access. From 2011-2014, in partnership with the NYU Prison Education Program and Rehabilitation Through the Arts, Khristal facilitated Devised Theater workshops, provided acting coaching, and performed alongside program participants at Woodbourne and Sing Sing Correctional Facilities. From 2014-2016, she served as Founding Deputy Director for Drama Club, an organization that provides incarcerated and court-involved youth with Improv-based theater programming. In 2017 she founded Devised Theatre Project, a volunteer-supported organization that offers young people in family shelters free theater classes and opportunities to devise and perform original plays. She received grants from the Awesome Foundation (2017) and Brooklyn Arts Council (2019, 2020) to support this work.
In 2022 she started fostering kittens for Brooklyn Bridge Animal Welfare Coalition. Ozzie Aus Kitten and Amebix are available for adoption now via the Brooklyn Cat Cafe website.
Khristal has an MA Educational Theatre in Colleges and Communities from the NYU Steinhardt School and a BFA Theatre from the Actors Training Program at the University of Utah.

Jack Daniel Woods (Lighting) has traversed the globe conceptualizing and designing production for multi-disciplinary arts companies and performers. In their recent role as head of production for the Sydney Symphony they were internationally recognized for their vision, creativity, and for saving an entire concert performance after a steinway grand piano free fell into a hole in the middle of the stage (story for another day.)