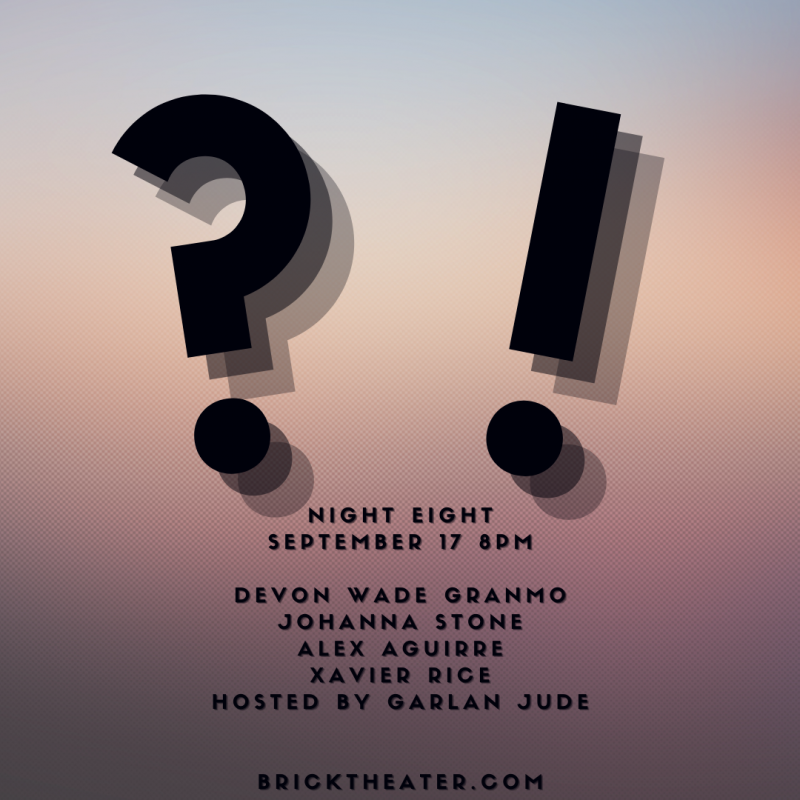 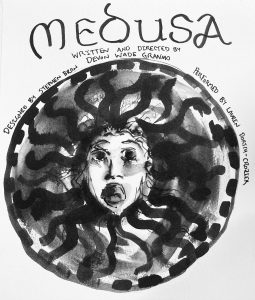 An excerpt from Medusa

Medusa is a gorgon. She’s got snakes for hair. Her gaze turns men to stone. She’s a head and she’s here to tell her tale. 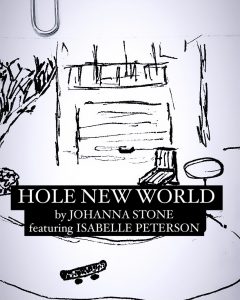 Hole New World
By Johanna Stone
Featuring Isabelle Peterson
Lenora Wormwood promised to free her generation from the mistakes of their parents and the horrors of the suburban masses. She did it! This is her victory speech.
IG: @josettastone
*** 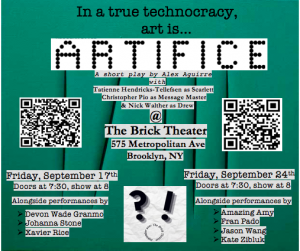 In an anarcho-capitalist technocracy, Scarlett and Drew are hired to make it seem as if artists still exist.

Alex Aguirre is a playwright, poet, theater director, and actor based in Brooklyn, NY. He wrote, directed, and acted in the surrealist play Lushland which was staged at Vital Joint and Patch Works in November 2019. Alex’s most recent full-length play is Phases of the Night, a Gothic tragicomedy set in a mausoleum. Alex also plays bass in the rock band Violet Grove.

Tatienne Hendricks-Tellefsen is a classically trained actor, born and raised in New York City. Tatienne studied Shakespeare at the Royal Academy of Dramatic Arts in London, and is a recent graduate of Atlantic Acting School. Tatienne wrote, produced and starred in her web series, ADULT, which was an official selection at Lower East Side Film Festival and won two audience awards at Indie Works, New York. ADULT also earned Tatienne an invitation to participate in the Tribeca N.O.W. Creators Market. Recent acting credits include: David Chase’s THE MANY SAINTS OF NEWARK, Kevin Vu’s short film, PERFECT AS CATS, and a lead role in the upcoming feature film, ALL MEN ARE WICKED.

Nick Walther is an NYC-based stage & voice actor with roots in Brooklyn’s experimental theater and performance community. Performance highlights include a six-hour durational play, Haunted House, at MoMA PS1, several Exponential Festival shows including Police in the Wilderness at Patchworks and Bernie Sanders Wants to Take Away My Fire Island Timeshare at The Brick Theater, playing a tree frog-like microgod in The Cosmic Thrust: Lushland at Vital Joint, and a public performance of Lord Dunsany’s The Gods of the Mountain at the Columbus Park Pavilion. Nick is a member of Theater Breaking Through Barriers, American Renaissance Theater Company, Saints of an Unnamed Country, and the co-creator and host of

Seize the Memes of Production, the first live meme-making gameshow (that we know of). Nick’s audiobook narration and voiceover work can be found online; nickwalther.com.

Christopher Pio was recently nominated for his work in the premiere of The Myth of Forgiveness at the New York Theater Festival. He also starred in Willem & The Judge, which had a simultaneous virtual premiere at 2020’s Garden State Film Festival & International de Film Sur L’art in Montreal.

Chris moved to NYC in 2014 to attend Atlantic Acting School where he studied with the Atlantic Theater Company founding members. Upon graduating, he has been a part of many independent films and off off Broadway plays. He is a self proclaimed art house movie theater nerd, and enjoys strolling around town with his dog, “Freddie Mercury”. 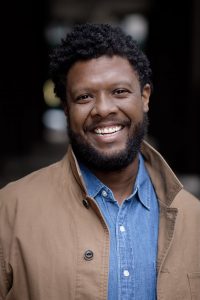 Xavier is a multi-disciplinary artist, originally from the midwest. Xavier is experimenting with various forms of storytelling (song, written word, character, projection, ALL OF IT). Follow Xavier @mr.mamma_rice