BASELINE: A Night of Dance at the Brick 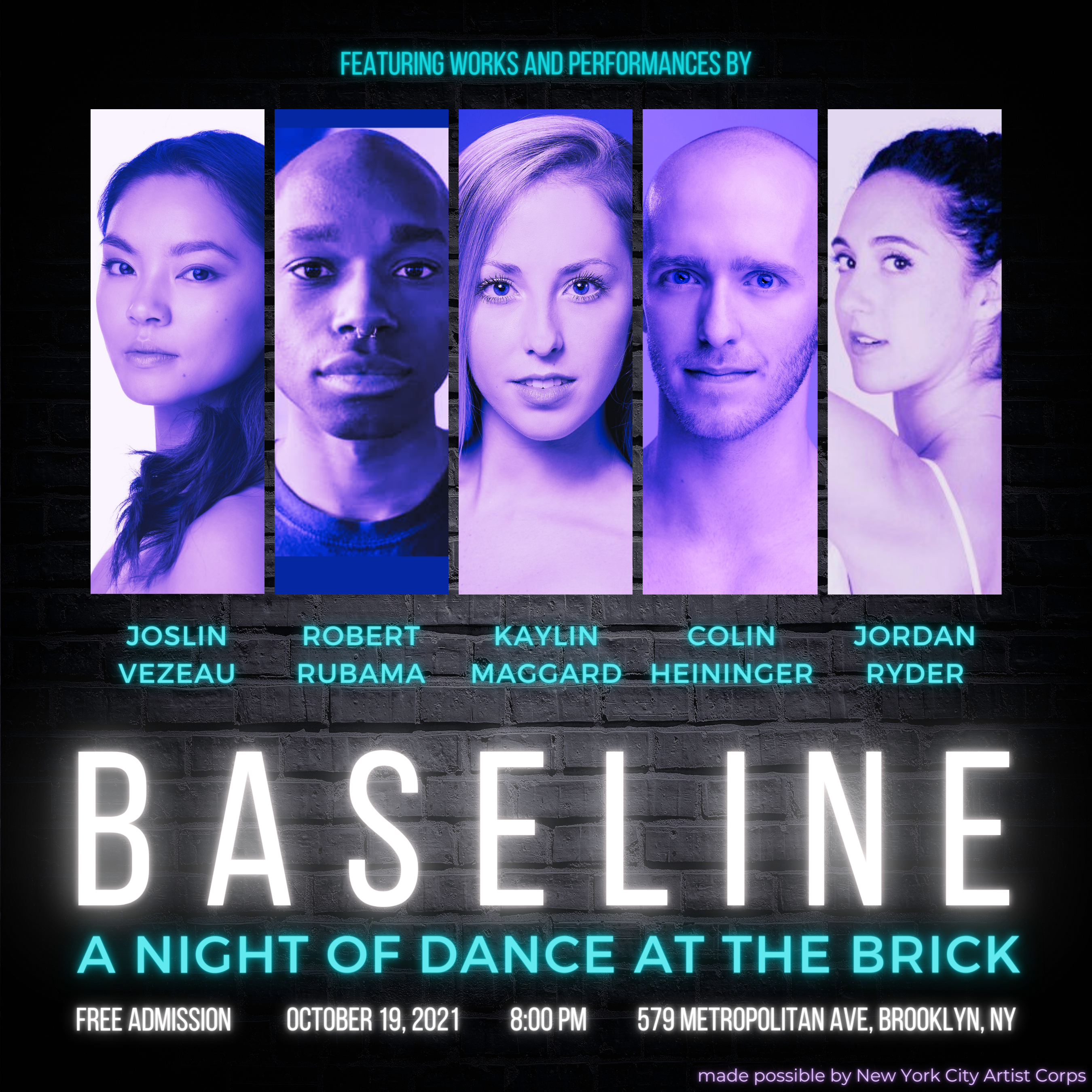 CHOREOGRAPHED BY: Colin Heininger with Marisa Illingworth and Joslin Vezeau

MUSIC BY: Tezeta (Nostalgia) by Mulatu Astatke; I Want You To Love Me by Fiona Apple; Mountain Divide by Lakker; cellophane by FKA Twigs

DESCRIPTION: Nostalgia is a story of love and fear told through dance.

TITLE: The Illusion of Separateness

MUSIC: The Illusion of Separateness by Brian Mark

MUSIC BY: Blurred by Darkstar

Colin Heininger is a current company member of Peridance Contemporary Dance Company where he is also on faculty as an instructor. He has shown work at the Performance Lab series at Peridance, The Craft, and with events through Hi-Artist. In 2016, Colin graduated on full tuition scholarship as an Honors Scholar from the University of the Arts in Philadelphia, where he was also named the Valedictorian of the School of Dance.

Marisa Illingworth is a Brooklyn based dance artist and recent transplant from Philadelphia. She graduated in 2016 from the University of the Arts under the direction of Donna Faye Burchfield. She worked for a variety of independent artists while based in Philadelphia, and prioritized working in non-hierarchical, socially-conscious collectives like The Naked Stark and the Dark Moon collective.

Joslin Vezeau graduated from the Ailey/Fordham BFA program and currently dances for Peridance Contemporary Dance Company. She is very excited to be dancing live after a year of quarantine!

Jordan Ryder hails from Illinois where she trained at LoMastro Performing Arts, Extensions Dance Company and the Scholarship Program at Hubbard Street Dance Chicago. She attended New York University Tisch School of the Arts where she graduated with a BFA in Dance and a double minor in Sociology and the Business of Entertainment, Media, and Technology. After graduation, Jordan formed her dance collective, RyderDance. Since then, she has shown work at 10+ venues in the tri-state area including the Brooklyn Botanic Garden, The Loew’s Jersey Theatre, and the Martha Graham Studio Theater. Her choreography has been broadcasted on PBS, Dance Parade, and other online platforms. Choreographic Commissions include Eryc Taylor Dance Company, NYU Tisch Dance Summer Residency, Art City’s Bromance (Web Series), One Day Dance, and Mélange Dance Company. Grants include Brooklyn Arts Council, NYU Tisch Space Grant, and ETD/ NCG New Choreographer Grant. Most recently, Jordan was a finalist for the WMU National Choreography Competition. As a freelance dancer, Jordan has danced in original works by Crystal Pite, Abarukas Dance | Yoshito Sakuraba, Guanglei Hui | Cross Move Dance Lab, Pamela Pietro, James Martin, and others. She is currently a dancer with Abarukas Dance | Yoshito Sakuraba. www.ryderdance.com

Alyssa Myers is originally from Yuma, Arizona where she received her classical ballet training from Jon Cristofori and Kathleen Sinclair at Yuma Ballet Academy. She then attended the USC Glorya Kaufman School of Dance graduating in 2020. During this time, she was mentored by Jodie Gates, Moncell Durden and Bret Easterling and performed works by Crystal Pite, William Forsythe, Ohad Naharin, Paul Taylor, George Balanchine and Azsure Barton. As an undergraduate, she became the Event Manager for SC Choreographic Collective and helped produce multiple fundraiser events in connection with Dancer’s Responding to Aids. She recently joined Traverse City Dance Project as a dancer in 2021 and was commissioned to choreograph “Winter” for their production of Four Seasons. She continues to investigate the social impact that dance initiates by researching the hybridity of different dance forms and their relationship to musicality and artistic expression.

Oscar Antonio Rodriguez, born and raised in Venezuela, is a professional dancer trained in Warehouse Dance Complex in Costa Rica. Rodriguez performed in the Teatro Nacional de Costa Rica works from renowned choreographer Cristina Gigirey with Danza ABEND. He appeared on “Dancing with the Stars Costa Rica and was featured in the first Costa Rican Broadway musical productions “West Side Story” (Pepe) and “Chicago” (Fred Casely/Ensemble). Regional theater credits include “West Side Story” (Bernardo) and “Saturday Night Fever” (Ensemble/Salsation Choreographer). He has performed in the Dimenna Center for Classical Music and the Radio City Music Hall, was recently seen in Steven Spielberg’s remake of West Side Story and featured in the production “Dancing Through…”, a virtual collaboration between Theatre Dance Vietnam and The Tank NYC. Rodriguez holds an M.F.A. in Dance from NYU Tisch School of the Arts. He currently performs with Amanda Selwyn Dance Theatre and Cherylyn Lavagnino Dance.

Terre Dance Collective is a New York City-based group of movement artists creating emotionally engaging and physically compelling contemporary dance. Terre was established in July 2017 by Artistic Director Robert Rubama. Since its inception, we have developed and presented choreographic and improvisation-based work in various venues across the east coast & midwest of the United States. Exploration and collaboration are a large part of our creative work. We believe that movement is the connective tissue of the universe and brings all bodies together.

In 2019, we were the Artists in Residence at the National Building Museum (Washington D.C) and had the opportunity to collaborate with NYC-based architecture firm The Lab @ Rockwell. In May 2021, we were able to host “Layers V.2”, a virtual performance that showcased the work of 10 choreographers from New York, Oregon, Pennsylvania, Maryland, and Virginia. We have also performed in 1Journey Festival (DC), Spaces Gallery (OH), Cleveland Public Theater (OH), and The Tank(NYC). We are the Fall 2021 Artists-in-Residence at The Floor on Atlantic.

Robert Rubama (They/Him) is a New York City-based dancer and choreographer. They graduated from George Mason University with a BFA in Dance. He has been able to work with companies such as Agora Dance, Haus of Bambi, Groundworks Dance Theater, PrioreDance, Carolyn Dorfman Dance, and Orange Grove Dance. Robert has also had the opportunity to perform works by Alejandro Cerrudo at The Joyce, Donald Byrd, Dianne McIntyre, Andrea Miller, and Mark Morris. They are the Artistic Director of Terre Dance Collective and a Co-Collaborator in Kroma. Robert is also a dancer in Peridance Contemporary Dance Company and LaneCo Arts.

Alyssa Myers is originally from Yuma, Arizona where she received her classical ballet training at Yuma Ballet Academy. She then attended the USC Glorya Kaufman School of Dance graduating in 2020. During this time, she was mentored by Jodie Gates, Moncell Durden, and Bret Easterling. She performed works by Crystal Pite, William Forsythe, Ohad Naharin, Paul Taylor, George Balanchine, and Azsure Barton. As an undergraduate, she became the Event Manager for SC Choreographic Collective and helped produce multiple fundraiser events in connection with Dancer’s Responding to Aids. She recently joined Traverse City Dance Project and was commissioned to choreograph “Winter” for their production of Four Seasons.

Veronica Kulik, originally from Chicago, Illinois, graduated with a B.F.A in Dance from George Mason University in 2020. During her time at Mason, she performed works by Lucinda Childs and Rafael Bonachela and has completed intensives such as Hubbard Street Dance Chicago, Henny Jurriens Studio in Amsterdam, and P.A.R.T.S under Anne Teresa de Keersmaeker in Brussels. Veronica interned for Costumer Cat Buchanan while at Mason and has worked for Carolyn Kostopoulos, of Carelli Costumes, at the Spoleto Festival in Charleston, SC as part of the costuming department. Veronica is based in New York City and is currently working as a freelance artist.

Born and raised in Columbia, Missouri, Kaylin Maggard began her training at Columbia Performing Arts Centre. She is a 2021 graduate from The Juilliard School, where she received a BFA in Dance. While in school, Kaylin was the recipient of the Joseph W. Polisi Artist as Citizen award. In 2017, she was a YoungArts winner in modern dance and a U.S. Presidential Scholar in the Arts semifinalist. Well versed in both traditional and contemporary styles, Kaylin has performed works by choreographers such as José Limón, Paul Taylor, and Bill T Jones during her time at Juilliard. She also premiered new work by Ohad Naharin, Jonathan Bond, Matthew Neenan, Andrea Miller, and Bryan Arias. Kaylin is thrilled to begin her first season with Peridance Contemporary Dance Company.