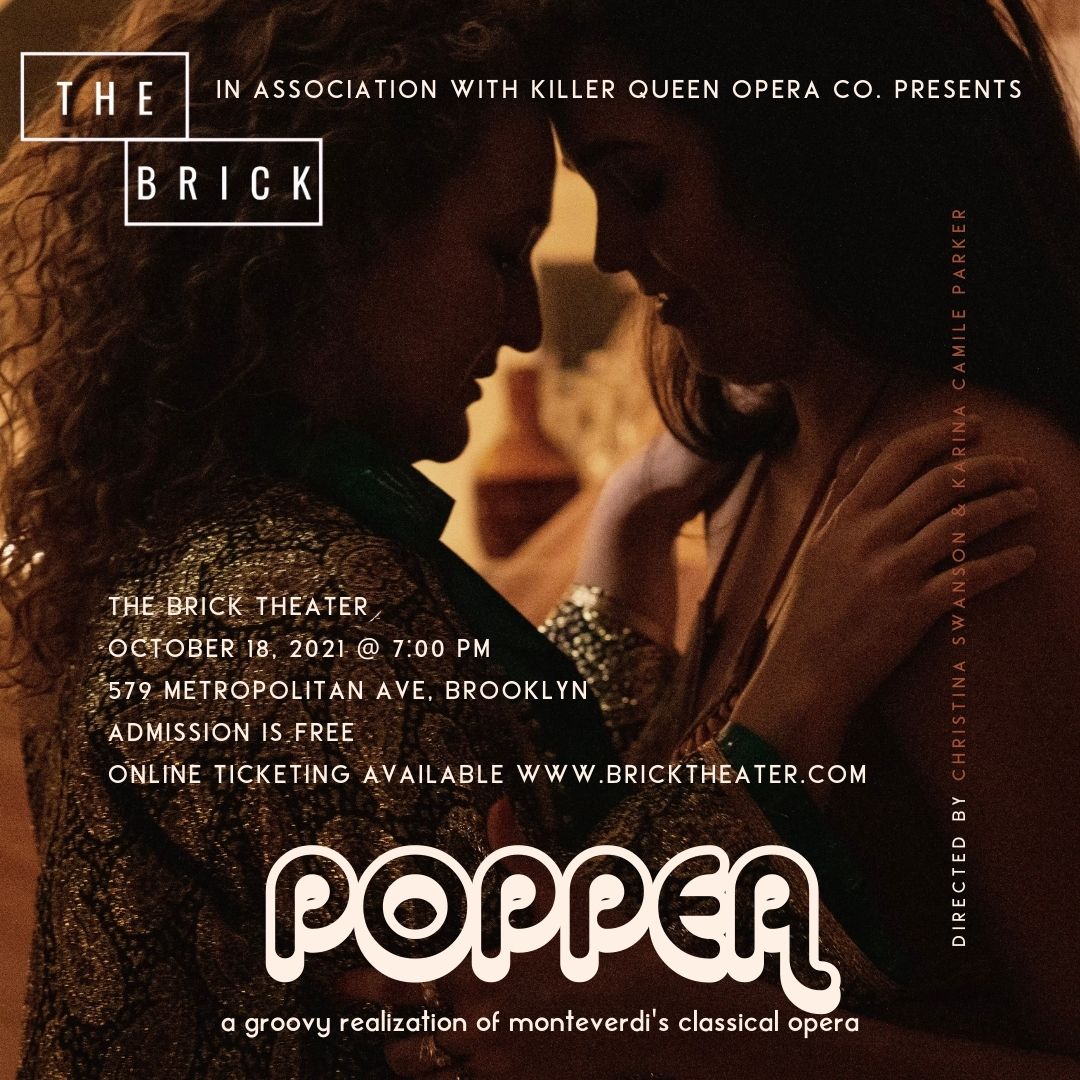 Who is blameless in the pursuit of power? Sin and virtue battle in the true story of the ruinous Roman Emperor Nero, who demolishes all obstacles in his path to coronate his mistress, Poppea. This film realization of a classic opera reawakens timeless characters as they jump into 1970’s New York City.

Written in 1643 and credited to the Italian composer Claudio Monteverdi, this opera follows the Roman Emperor Nero as he demolishes all obstacles in his path to coronate his mistress, Poppea. For centuries, stagings of Poppea have presented Nero as a power hungry villain. However, this film realization of the classic opera complicates the narrative: is anyone blameless in pursuit of power? Timeless characters are reawakened as they jump from Ancient Rome to 1970s New York City. The lure of celebrity status, the sting of betrayal, and the power of love are set against a backdrop of political and social unrest, evoking a time not unlike our own.

Killer Queen Opera is a female-led arts organization based out of New York City committed to providing an inclusive platform for artists and audiences alike. KQO is dedicated to featuring female artists, artists of color, and the LGBTQ+ community through uplifting artistic experiences that bring awareness to issues that our communities face today.

Mezzo-Soprano Christina Swanson is a singer, actor, and performance artist based in New York City. Swanson received her Bachelor of Music in Vocal Performance from the University of Michigan in 2016, where she studied under tenor Scott Piper.

A diverse performer, Swanson embraces her artistry in the arenas of opera, theater, and performance art. Recent performance credits include Siebel in Faust (Hudson River Opera), Venus in Orphée aux Enfers (Opera MODO),  Anna Gomez in The Consul (Opera MODO), and Satirino in La Calisto (Red River Lyric Opera Festival). Swanson is also half of the duo “Voce Nova,” along with Karina Parker, who recently made their ensemble debut singing “Come Sei Gentile” at a Pop-up concert in Richard Tucker Square. Chorus work includes Turandot and Vivaldi’s “Gloria” with the Detroit Symphony Orchestra.

An avid creator of new and cross-genre pieces, Swanson’s original performance art has been seen in the Detroit Fringe Forward Festival, Pittsburgh Fringe and Montreal Fringe Festivals, in addition to a work-in-progress festival, WIPFest, that she co-founded. The piece, “Absence,” was highly acclaimed in both Pittsburgh and Montreal. Her newer works have been workshopped in New York at Movement Research and Green Space. Swanson has worked with the band “The Strange” whose cabaret piece, “Voices of the Carousel” has been featured on WDET Detroit’s Essential Music and has been performed at Planet Ant Theater in Hamtramck, MI.

Upcoming performances include Nicklaus in “The Tales of Hoffman” with Hudson River Opera.  She is the co-director of a film version of “L’incoronazione di Poppea,” with a company she co-founded, Killer Queen Opera, in collaboration with the Brooklyn Arts Council. “Poppea” will be released this summer.

In her music and performance art, Swanson explores themes of physical identity through original movement and sound. She is trained in classical ballet, modern, and improvisational dance. Swanson also works as a private teacher. Read more on her website here.

Karina (soprano) is a Brooklyn-based multi-disciplinary performing artist, educator, and director. Karina is a co-founder and co-director of the new, grassroots opera company, Killer Queen Opera, and is a founding member of the New York-based vocal ensemble Musica Vera.

Karina is a multi-disciplinary artist, practicing many disciplines such as musical theater, dance, opera, jazz, and other performance art. She also upholds a special interest in early, Baroque, and Renaissance music. Karina has performed with companies such as Pittsburgh Resonance Works, Pittsburgh Festival Opera, Oberlin School of Music, Carnegie Mellon University, and Jamaica Center for Arts and Learning.​ Performance highlights include the role Calisto in La Calisto (Cavalli), Drusilla in L’incoronazione di Poppea (Monteverdi), Oberto in Alcina (Handel), and Ida in Die Fledermaus (Strauss). In addition to her operatic repertoire, Karina is also an active member and soloist in New York City’s Canticum Novum Singers, directed by Maestro Harold Rosenbaum, and continues her role as a founding member in the NYC-based vocal ensemble Musica Vera. Her past choral work includes performances under the direction of internationally renowned conductors Manfred Honeck (Pittsburgh Symphony Orchestra), Gary Wedow (Juilliard), conductor and violinist Andrés Cárdenes, and many more. Before moving to New York, Karina was the section leader and soloist at the Church of the Redeemer in Pittsburgh, PA, and is a soloist in churches throughout New York City.

​​Currently, Karina is a Resident Teaching Artist and Education Assistant at the Jamaica Center for Arts and Learning. She also runs her own private teaching studio providing vocal and piano lessons for students of all ages and experience levels.

​When not teaching or performing, Karina works in arts administration, and enjoys painting, reading, and traveling!

Killer Queen Opera Co. is Fiscally sponsored by Fractured Atlas. All donations are tax deductible to the extent permitted by law.