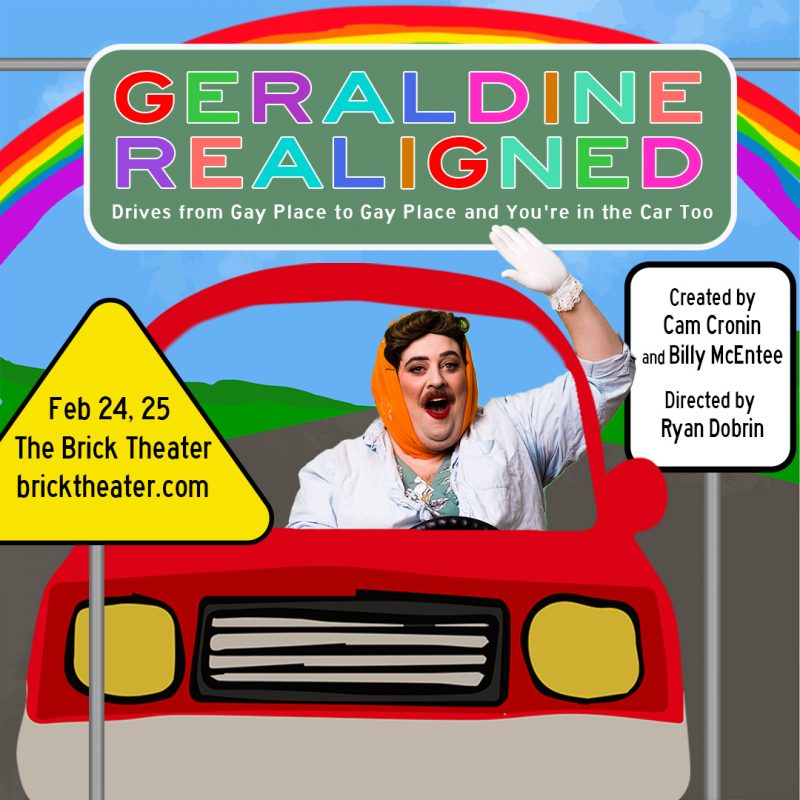 The Brick presents
Geraldine Realigned Drives from Gay Place to Gay Place and You’re in the Car Too
Created by Cam Cronin and Billy McEntee
February 24 and 25, 2023
730pm

See America’s great gayborhoods with Geraldine Realigned in 60 minutes flat! Should anything go awry, Geraldine’s alter ego — a consultant named Cam, far less zany — will be on hand to course correct, and maybe chitchat about identity formation. Buckle up for a queer road trip that’s one helluva tour (de force).

Get a tune up, fill ’er up, and buckle up: Geraldine Realigned is taking you on the road to see America’s Great Gayborhoods! Or…that was her plan, until car woes, detours, and restaurant chains stole her off the main drag. Clumsy and kaleidoscopic, Geraldine’s trip yields data that a consultant named Cam harnesses as research to understand how we form a self. A queer pilgrimage-turned-presentation-turned-performance, Cam and Geraldine’s communion with their audience illuminates how we get to where we want to go.

Cam Cronin (Creator/Performer, he/him) is a New York artist by way of Boston. He’s written for Observer and The Brooklyn Rail, assistant directed for David R. Gammons at SpeakEasy Stage Company, and performed in multiple shows with Shit-Faced Shakespeare and Imaginary Beasts. He appeared in the short film Lindsay Lindsey Lyndsey.

Nick Auer (Light and Sound Designer, he/him) is a designer, director, and experience designer. His work aims to forge new relationships between audiences and live performance. He is co-founder of The Brouhaha Theatre Project, named one of No Proscenium’s Top Immersive Theatre Companies to Watch. Nick is also a professional stage manager and production manager. nickauer.com

Catalina Kulczar (Director of Photography) is an award-winning, multiplatform filmmaker and photographer. Her film and photographs are animated, honest, and connected, often exploring women’s roles in contemporary work and society. Her work has been published in The New York Times and National Geographic, among others.

The Brick is a 501(c)(3) non-profit. We rely on the generosity of our patrons. Consider giving a tax-deductible donation today to help make The Brick a sustainable hub of experimental performance for many years to come. Donate Here or Join Our Patreon