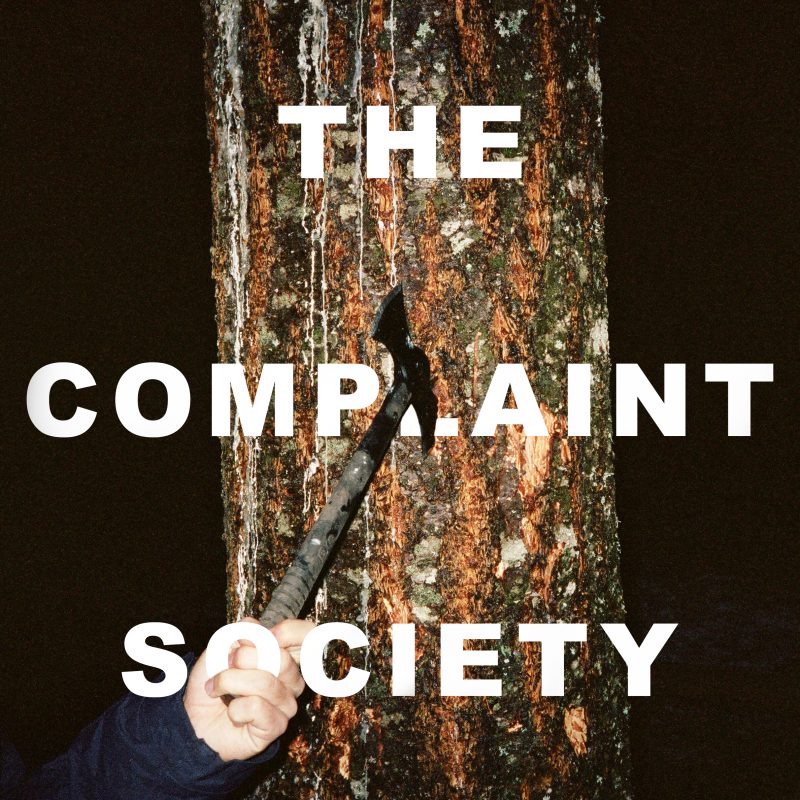 Contextualized by our era of infinite emergency, The Complaint Society documents and synthesizes a pixelated present of ruined meaning, anxious forces, neurotic tendencies, and looping violence. A range of urgencies–climate grief, state-sanctioned force, reparative justice, reproductive rights, systems of surveillance, the growing fascist theocracy in the US, and the memeification of political mood–appear and reappear in the performance as sirens, propositions for time travel, and calls to action.

Cast in monochromatic lighting on an empty stage, four performers follow a text-based poetic score as they offer thought forms to an audience in the round. Over the course of this hour-long piece, the performers deliver fast-paced and electrifying combinations of monologues, asides, and soliloquies interspersed with highly-stylized choreographed movement. The Complaint Society is as much a dialogue with crisis as it is dialectic with the world of language at large in which we are all immersed.

Each time I present a performance, I create a zine of the text to distribute free-of-charge to the audience. As my writing can be dense and the performances are often fast-paced, the zine functions as both a program for the piece and as an opportunity for the audience to further engage with writing on their own time, allowing the impact of the work to reverberate beyond the performance itself. It’s good to know that I refer to text for the performances as “text-based scores” (as opposed to poems or scripts.) The attached images are of the zine from my most recent performance MOUTHBRAIN at the Institute of Contemporary Art in Los Angeles in August 2022.

THE EXPONENTIAL FESTIVAL
JANUARY’S BROOKLYN-BASED THEATRE FESTIVAL
~ A pleasure, a mess, a thrill, and a dream. ~​

Barnett Cohen (he/they) shapeshifts between poet, performance maker, painter, and political activist. Born in South Africa, Cohen grew up in Georgia, and now lives between Los Angeles and New York. Throughout his anti-disciplinary practice, Cohen proposes a kaleidoscopic queer surrealism. He accumulates language and symbols and disorganizes them into alternative logics within his work, materializing shape and sound into absurdist and anarchic non-sense. He has presented work at The Institute of Contemporary Art, JOAN, REDCAT, LAXART, Pieter, 356 Mission, Mast on Fig, Human Resources, The Box (all in Los Angeles) JDJ, The International Center of Photography, The Center For Performance Research (all in New York), City Limits (Oakland), and The Onassis Foundation (Athens, Greece) In 2021, Open Space/SFMOMA published a collection of his poems alongside those of artist Simone Forti. He has been in-residence at SVA, Skowhegan, MacDowell, NARS, and will be attending Rupert in Lithuania in 2023. He was recently nominated for the Rema Hort Mann Emerging Artist Grant. In 2017, Cohen founded the Mutual Aid Immigration Network (MAIN), a trilingual free assistance hotline for people detained in immigration detention centers across the United States. MAIN connects people who call with bond funds and legal services that can accelerate their freedom from incarceration.

Lena Engelstein is a Brooklyn based choreographer and performer. In the last year, she has co-created and performed a series of duets–the first with LA-based performance artist Magda San Millan; the second with dancer Jo Warren. She has collaborated with and performed in work by director Lisa Fagan since 2017, and is currently the assistant choreographer/performer in the interdisciplinary performance collective CHILD, headed by Fagan. Other performance credits include: Third Rail Company’s Bessie award winning immersive theater show Then She Fell (company member, 2019-2020), Brendan Drake (company member, 2017-2020), Falcon Dance (company member, 2018-present). Engelstein has performed on stages across New York City, including: New York Live Arts, Judson Memorial Church, Target Margin Theater, Danspace Project, PS 122, Center for Performance Research, HERE Arts, Gibney, The Brick, Vital Joint and Triskelion. She has taught dance and choreography at SUNY Brockport, Bard College, and The Field Center. Lena holds a B.A. in Mathematics and a minor in Dance from Colorado College. IG: lenaengelstein

Briana Archer (she/her) is an actor, singer, dancer based in Brooklyn, NY. She received her BFA in Drama from NYU Tisch, studying at the Experimental Theatre Wing and abroad at the International Theatre Workshop in Amsterdam. She has performed at The Public Theater’s Under the Radar Festival, BAM Harvey, Paradise Factory, The Brick, Red Cloud Opera House, and the Lenfest Center for the Arts, among others. She sings for Brooklyn-based band Daisy the Great. For more information visit www.brianaarcher.com or find her @briearcher.

Rachel Rivera (they/them) is an immersive and interactive theater maker from Los Angeles. After graduating from the UCLA theater program, they built and performed in originally devised immersive productions with Play Collaborative Arts Venue, Montserrat DTLA and Ceaseless Fun Productions. They recently performed at Lenfest Center For the Arts for graduating playwrights Jay Stull and Sam Grabiner. They await the end of the world in Brooklyn with three cats.

Deja Bowen (she/her) is an actor, model, and performer based between New York & Los Angeles. A graduate of AMDA College & Conservatory, she has previously collaborated with Barnett Cohen on SOMETHINNNGISALWAYSSSWRONGGG (JOAN, Los Angeles, 2019), MOUTHBRAIN at JDJ in New York, and the west coast premiere of MOUTHBRAIN at the Institute of Contemporary Art in Los Angeles (2021 & 2022.) IG: @ohhappydej_ dejabowen.com

Cliff Hoitt-Lange is a queer performer-theater-maker, writer, and experimental violist. You may find them screeching the horse-hair bow on weathered strings in the woods, or tampering with a tape machine. This is their second year as a co-curator with Exponential Festival, bringing them joy every January. Recent stage managing and assisting credits: The Emus (Yeujia Low/Exponential Festival), mɔːnɪŋ (Gelsey Bell/HERE RAW), Bloodshot (underlords/Exponential Festival). Performing: The Infinite Hotel (Michael McQuilken/Prototype Festival), Crave (Cati Kalinoski), Twelve Angry Men (Jenny Beth Snyder). Cliff strives to unlearn their own racism and disrupt systemic inequities in theater, food systems, and their community. They are currently working on a play that dives into the icky-sticky dreams and realities of U.S. rape culture and childhood.

Aaron Potts is a Detroit born and raised Brooklynite who grew up loving award shows, Wonder Woman, Soul Train and sitcoms. He discovered his love for fashion as a kid watching the folks decked out at church and while shopping with his mama who loved pretty dresses, the color red and beautiful flowers in her hair. He attended Parsons School of Design (The New School) in NYC. While there, he interned with Marc Jacobs at Perry Ellis and with Donna Karan at DKNY. After graduation, Potts went on to design for Emanuel Ungaro, Anne Klein, Victoria’s Secret, Escada (Munich, Germany), Badgley Mischka, Ellen Tracy, Kaufmanfranco and Tamara Mellon. @apottscollection Recent press: Vogue & NYTimes.