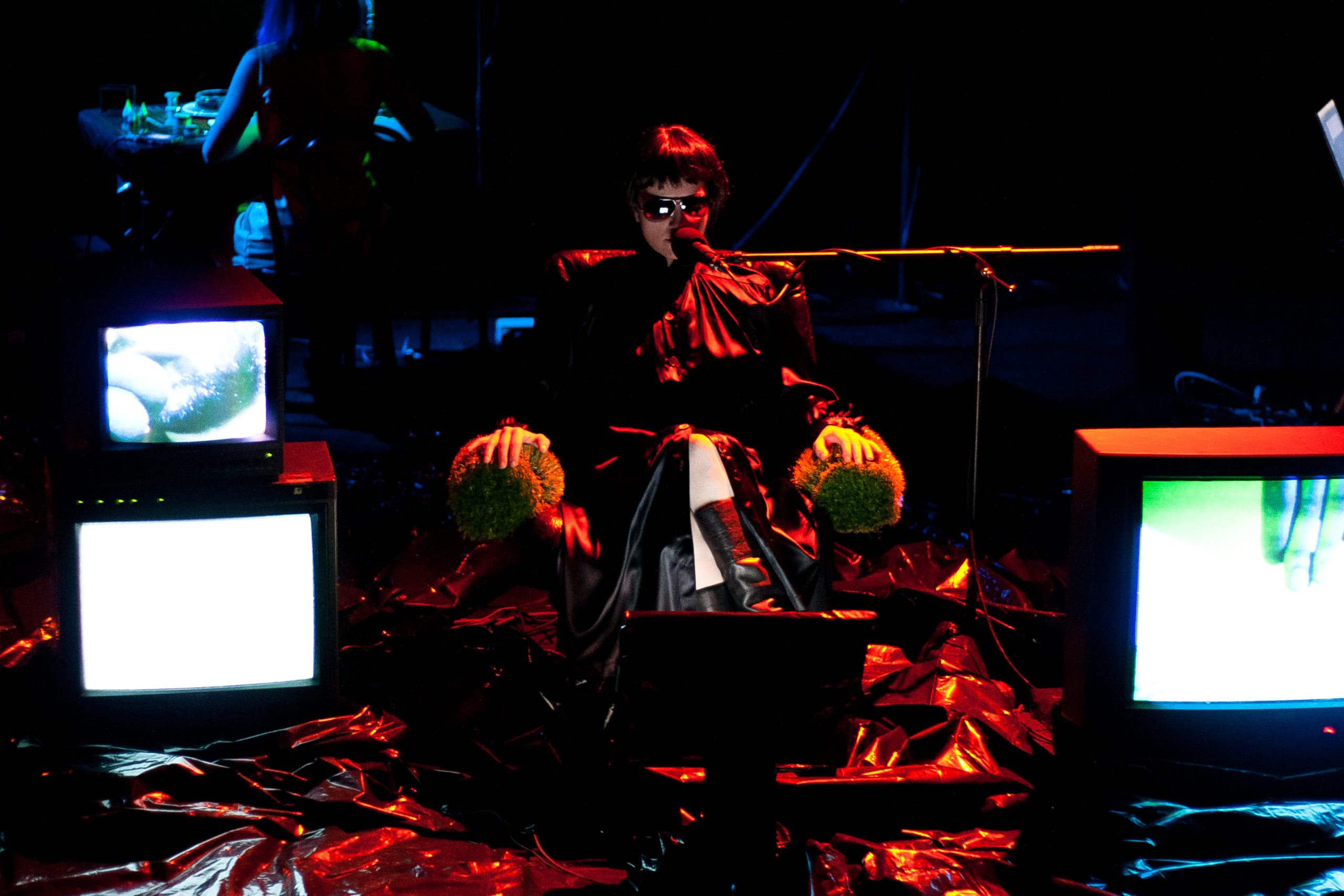 The Brooklyn-based performance group Object Collection, acclaimed for its invigorating blend of music and theater, presents its live, staged adaptation of Robert Ashley’s seminal studio composition, Automatic Writing (1979). The piece premiered at Incubator Arts Project in 2011, with subsequent performances in London and Birmingham in 2013.

Originally composed in recorded form over five years, Robert Ashley’s Automatic Writing is the result of the composer’s fascination with involuntary speech. Ashley said, “I went towards the idea of sounds having a kind of magical function – of being able to actually conjure characters. It seemed to me that in a sort of psycho-physical sense sounds can actually make you see things, can give you images that are quite specific.” He recorded and analyzed the repeated lines of his own mantra, extracting four musical characters and creating an early form of ambient music that is incredibly evocative.

On a stage strewn with television monitors, video cameras, and dim pools of slowly shifting light, Object Collection evokes the four characters – or parts –while crafting an environment that aims to heighten the enigma and melancholic mood of the original. Performers inhabit four disparate islands, contributing to a dense sound environment. The recording, which never had a score for performance, is treated as a composition that can be interpreted instead of recreated: Genders and languages get switched up, electronics are used over analog, and objects and scenic elements are introduced to give the work a visual dynamic. The result is a mirage-like, transient and vibrant environment, conducive to listening to the music, as well as enriching it.

Robert Ashley (1930-2014) is particularly known for his work in new forms of opera. In Ann Arbor in the 1960s, Ashley organized the ONCE Festival and directed the legendary ONCE Group, with whom he developed his first operas. Throughout the 1970s, he directed the Center for Contemporary Music at Mills College and toured with the Sonic Arts Union. He produced and directed Music with Roots in the Aether, a 14-hour television opera/documentary about the work and ideas of seven American composers. His opera for television, Perfect Lives, is widely considered the precursor of “music-television.” Stage versions of Perfect Lives, Atalanta (Acts of God), Improvement (Don Leaves Linda), Foreign Experiences, eL/Aficionado and Now Eleanor’s Idea toured throughout the US and Canada, Europe and Asia during the 1980s and 90s. Dust, followed by Celestial Excursions and The Old Man Lives in Concrete toured from 1999-2012. He finished his last two operas (Crash and Quicksand) in 2013. Crash was presented as part of the 2014 Whitney Biennial; the Kitchen presented Quicksand in early 2016. www.robertashley.org

Kara Feely is a writer, director, designer, and performer for experimental theater and interdisciplinary performance. Her work draws inspiration from experimental writing and music composition strategies, and combines a variety of materials, from found text fragments and landscapes of objects, to recorded interviews and radio broadcasts. Kara has been a guest artist at Arhus University in Denmark, Ca Foscari University of Venice, Wesleyan University, and Kenyon College. Additionally, her texts have been published in Antennae, a journal of experimental writing and performance, PLAY A JOURNAL OF PLAYS, Musiktexte, and the Japanese imprint futow.

Travis Just is a composer based in Brooklyn, NY. His work often uses text, objects, and gesture in addition to instruments, voice, and electronics. He has composed six operas: Problem Radical(s) (2009), Innova (2011) and NO HOTEL (2013), cheap&easy OCTOBER (2015), It’s All True (2016), and You Are Under Our Space Control (2019). His writings on music and art have appeared in John Zorn’s Arcana series, MusikTexte, the journal Tempo (Cambridge, UK), and the Experimental Music Yearbook.

Object Collection was founded in 2004 by writer/director Kara Feely and composer/musician Travis Just. Based in Brooklyn, the group operates within the intersecting practices of performance, experimental music and theater. They are concerned with simultaneity, complexity, and radicality, combining dense layers of text, notation, objects and processes. Object Collection work to give audiences unconventional viewing experiences through their merging of theatricality and pedestrian activity, and their works upset habitual notions of time, pace, progression and virtuosity. They value accumulation above cohesion. www.objectcollection.us